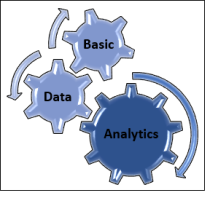 Excel’s Text to Columns function allows you to separate pieces of data in a single column into multiple columns.

This function helps when key data is buried in a field with other information and you need to extract the key data into a separate column before you can analyze it.

For example, you obtain a list of email addresses, and all you want are the user IDs. Or you get a list of servers, and the server name is server.domain.com, and you need just the “server” name. Or you need to separate LastName, First Name into separate columns. That’s where Text to Columns saves the day.

This article is the fourth post in the Excel basic data analytic series.

These procedures are written for Excel 2013, but the same steps should also work in Excel 2010, but the screenshots might be a little different.

Extracting Partial Data from a Field

To isolate the user ID from email addresses:

In step 4 above, you can select multiple delimiters. For example, if the data was JON316..itauditsecurity.com, the delimited would be 2 periods (..). (stuff like that DOES happen, but usually with data other than email addresses). In this case, you would enter a period (.) in the Other box and check the Treat consecutive delimiters as one box as shown in Example 5a below. 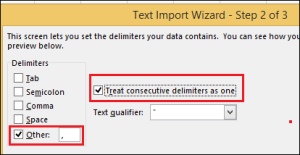 In step 5 above, if you leave the Column Data Format field at the default format (General), any user names that are similar to calendar dates will be changed to dates. For example, JAN01 becomes 1-Jan, which you do not want. See Example 6 below.

Always ensure you pick the correct format. Unless the data contains dates, Text format is usually the safest choice.

Formatting all the Columns 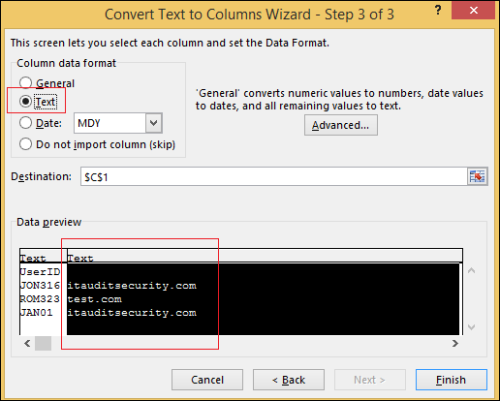 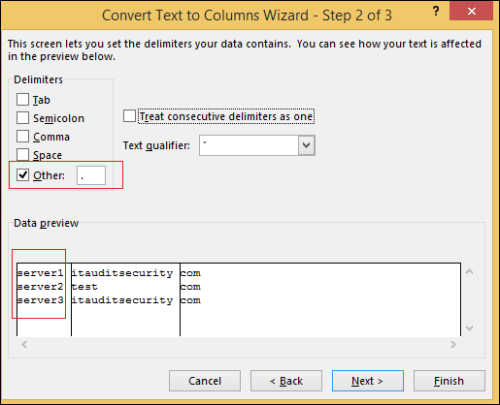 See all the posts for these series at Excel: Basic Data Analytic series.

Filed under Audit, Data Analytics, Excel, How to..., Technology

6 responses to “Excel: Text to Columns”